Limited Time Offer: $30 for your first month of care!

What is panic disorder?

Panic disorder is a condition in which people have sudden and repeated panic attacks. Panic attacks are where it feels like their heart is pounding quickly and they feel an impending sense of doom. A person experiencing a panic attack may start to sweat, feel shortness of breath, and experience dizziness.

While most panic attacks end within 20 to 30 minutes and peak within 10 minutes, the experience is often disorienting and can be quite frightening. When it starts to occur repeatedly, seemingly without reason, an individual may start to feel anxiety at the thought of another panic attack starting out of the blue. Then they'll start to try and avoid situations that might trigger an attack. This could be an indication of panic disorder. According to the American Psychological Association, one out of every 75 people might experience panic disorder.

What are the signs and symptoms of panic disorder?

Panic disorder, like panic attacks, often begins in the late teens or early adult years. The disorder has both genetic factors associated with a family history and environmental factors like significant life transitions. People with panic disorder may experience:

Panic attacks are the main component of panic disorder. The following infographic displays some of their symptoms. 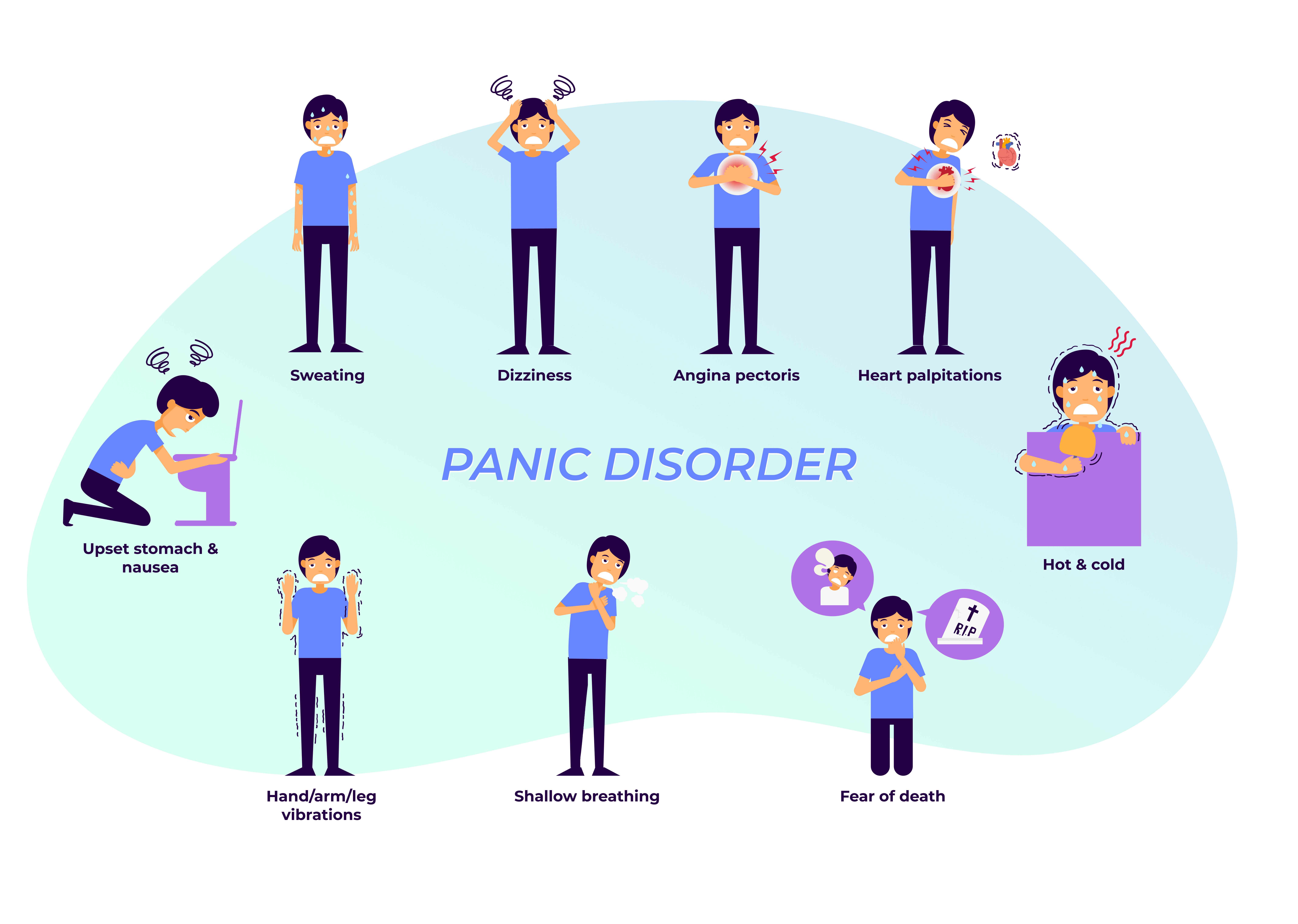 Oftentimes, panic disorder occurs at the same time as other mental health disorders such as anxiety and depression. Some people develop a condition called agoraphobia—the fear of being in crowds, standing in line, or going into shopping malls—out of fear of having another panic attack or being unable to escape.

What other mental health disorders are panic attacks associated with?

Panic attacks are associated with panic disorder. However, they can come about with the following mood and anxiety disorders:

How are panic attacks and panic disorder treated?

A doctor must diagnose panic disorder through an interview about your past health and a physical exam. Once diagnosed, treatment options include counseling and psychotherapy, specifically cognitive-behavioral therapy (CBT).

Medication like selective serotonin reuptake inhibitors (SSRIs), beta-blockers, and benzodiazepines can also be effective. SSRIs are antidepressants but help with the symptoms of panic disorders.

Treatment can help most people control or stop panic attacks. Early treatment may prevent additional disorders such as depression, anxiety disorders, and substance use disorder from appearing.